The earliest recorded historical reference to Kinnoull Parish Church appears in Bagimond’s Roll, a Papal taxation, of 1287. Although in the diocese of St Andrew’s, it was not one of the Churches mentioned as having been consecrated by Bishop David de Bainha in the middle of the 13th century. However, this is not to say that the parish did not exist or that there was not a Church.

The site of the original church building is uncertain. The “old church” at Wellbank, vacated on entry to the present building, was itself a renovation, carried out in 1779, of an earlier building on the same site. This building must have been in existence in 1635 since the statue of the first Earl of Kinnoull was erected in it in that year. The “old church” with its statue and graveyard now form an integral part of the Norie Miller Walk.

By the early 19th century it was recognised that, due to the dilapidated state of the “old church” and a rapidly growing parish, a new, larger building was required. The present building was opened for worship on Sunday 15th April 1827. It had cost £3,873 15s 6d to build. A new manse was built in 1829. This was sold in 1986. The church hall was built in 1901.

The stained glass windows within the church belong to several periods. The large west window, “The Millais Window” (pictured above), which faces one on entry by the main door, was presented by George Gray of Bowerswell in 1870. Its design was based on drawings made famous by his son-in-law, Sir John Everett Millais, President of The Royal Academy. The painted glass panels make up a series of 14 separate Parables of Our Lord.

The east window above the main door, presented by Miss Alice Anderson, depicts the Nativity, Christ calling the Disciples, Christ appearing to the Disciples following the Resurrection and Christ at Emmaus. The window was dedicated in 1933.

In the south west corner of the church are two memorial windows. The one on the west wall, commemorating the Rev John W Henderson, depicts Jesus’ baptism, the raising of the widow’s son, the Crucifixion with the figures of Mary and John at the foot of the Cross and Jesus with Mary Magdalene in the garden. 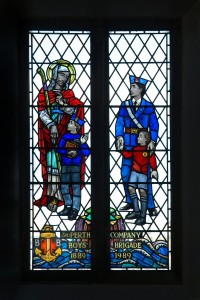 The south window, commemorating Mrs Margaret Anderson, includes the figures of David and Isaiah, The Annunciation and the Presentation in the Temple.

The west window of the south transept, commemorates the Rev William Hume, and was installed in 1973. It portrays St Columba and St Ninian (pictures below), the two saints principally associated with the spread of Christianity throughout Scotland.

In the north west corner of the church is the Boys’ Brigade Centenary Window, presented to the church by its Boys’ Brigade company, the 3rd Perth, in 1989.
In 1977, the 150th anniversary of the opening of the present church building, substantial changes were made to the interior layout of the church, the most significant being the moving of the organ consul from in front of “The Millais Window” to its present position. The pulpit was also raised. In 1957 the organ had been completely rebuilt. It was extensively renovated in 1995.

In 2002, the 175th anniversary of the present church building was celebrated, with a number of congregational Special Events.

Over the past few years the Church and its buildings has been subject to a programme of continuing maintenance to preserve the buildings for future generations. The Manse had a new utility room added, the Hall had a new heating system installed and all its windows replaced. As the building is a ‘Grade 2 listed building’ special consideration had to be made to the type of windows installed. During 2006 a number of stained and plain glass windows were restored to ensure their preservation. During the process 12 windows were removed, refurbished and restored. This included the “Millais Window”. The refurbishment work for this project was approximately £90,000. The windows were completed by the end of 2006 and a Re-dedication Service was held on Sunday 28th January 2007.  In 2008 the pipe organ, which had reached the end of its useful life, was replaced by a fine 3 manual Makin digital organ. The opportunity was taken to create a new vestry in the space below the remaining organ pipes. (With many people assuming the sound comes from the pipes and not speakers). The church was flooring was replaced in 2012 and at the same time a wheelchair area was created with the removal of the pews in the North chancel to provide space for the increasing number of people from Upper Springlands and their carers who attend the weekly services.